Coenzyme Q10, abbreviated as CoQ10, is an antioxidant made in the human body. It is similar to a vitamin and is found in every cell of the body. CoQ10 is produced by the body for basic cell function and is used to produce energy the body needs for cell growth and maintenance.

Antioxidants also protect the body from damage caused by harmful molecules. CoQ10 is naturally present in small amounts in a wide variety of foods, and is found in abundance in organ meats particularly liver, kidney, heart, sardines and mackerel. 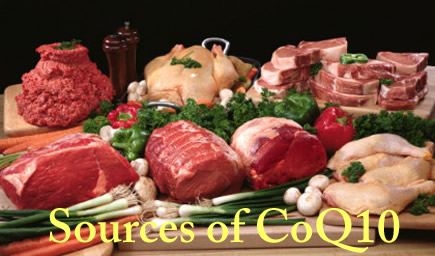 The production of CoQ10 in the body decreases with age and levels may be lower in people with certain illnesses like cancer, certain genetic disorders, diabetes, heart disease, Parkinson’s disease, muscular dystrophy etc. Use of certain medications may also lower the levels of CoQ10 in the body which can be increased by taking over-the-counter CoQ10 supplements.

CoQ10 is a true Co-enzyme which is essential for several bioenergy enzymes that are necessary for cells to generate energy from food substances. Within the mitochondria, molecules of CoQ10 continually shuttle between bioenergy enzymes, transporting protons and electrons from one bioenergy enzyme to another. Use of Co-enzyme Q10 is beneficial in a wide variety of conditions including:

Heart Disease – The survival rate of patients of cardiomyopathy has shown a significant improvement when using CoQ10 as compared to when using traditional drugs according to a recent study. Most of the patients with cardiomyopathy became normal after starting CoQ10 therapy and 75% of them were alive after 3 years, as compared to 24% patients who were using conventional treatment during the same time.

Boosts Heart Function –  Patients with troubled hearts have a deficiency of CoQ10, whereas it is present in adequate amounts in healthy and well functioning hearts. Research carried out to support this observed the ailing heart taking on renewed vigor after starting CoQ10. Therefore, it is not just necessary for proper functioning of the heart, but a decreased state can be expected when levels of CoQ10 begin to drop. Reintroducing CoQ10 in the diet again boosts its levels back to normal.

Prevents Heart Attack – CoQ10 supplementation helps strengthen the failing heart by increasing its energy efficiency. The human heart naturally has its own fail-safe method of protecting itself when a heart attack occurs. CoQ10 supplementation takes care of any deficiency and not only strengthens the heart but also protects it against the possibility of the heart not being able to cope with another attack, which can be fatal.

Relieves Painful Angina – CoQ10 is considered to be an effective drug for the treatment of angina pectoris. It has an essentially different mechanism as compared to other conventional drugs.

Although most people like to exercise, there are many who may not be able to exercise due to certain health problems or simply because of a sedentary lifestyle. Lack of physical activity never gives their hearts an opportunity to work out.

Interesting new studies show that the heart’s performance and strength can actually be improved safely without the force of exercise by increasing the concentrations of CoQ10 in the heart.

Prevents Heart Disease – CoQ10 protects against heart disease by preventing deposition of cholesterol in blood vessels. It helps improve the strength of cardiac muscles and prevents arthereosclerosis in patients with stabilized heart failure. It improves the heart rate and systolic & diastolic blood pressure. Similar studies have shown that a deficiency of CoQ10 may result in cardiac arrhythmia, but its use reduces it.

Aging Process – The production of CoQ10 in the body starts reducing after the age of 35 years. This shows an overall decrease in all the systems of the body. CoQ10 supplementation helps slow the aging process by enhancing generation of energy and better metabolism in body cells. Aging of skin tissues is also decelerated by using CoQ10, and the person looks younger, with stronger hair and healthier nails.

Increased Physical Performance – CoQ10 is extremely beneficial for those engaged in extensive exercise and sports as it helps the body regenerate quickly and increase efficiency.

Stressful Conditions – Presence of C0Q10 in the body helps the body to overcome stressful conditions.

Periodontal Disease – Use of CoQ10 in patients with periodontal disease has shown to be effective in reducing gingival inflammation, as well as periodontal pocket-depth and teeth mobility.

This information on CoQ10 has been taken from AWARDIN plus® Capsules (Composition: Coenzyme Q10 BP/USP 50mg)

More from my site